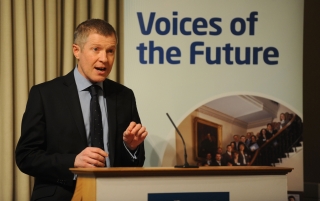 The fourth lecture in our series started off by Mr Rennie stating that we probably all agreed on the third part of his title. And that he would argue that the first two, although of course more controversial, were crucial to safeguard it.

At several points during his speech, Mr Rennie highlighted parallels between the “In Britain” and “In Europe” dialogues currently taking place, describing his own party as the “Party of In”. Not without pointing out though, that both the EU and the UK require reform “to be the best that they can be for Scotland”.

In Britain. In Europe. In Work.  Willie Rennie at the Royal Society of Edinburgh on 4th February 2014  speech here.