By Young Academy of Scotland10th June 2014 No Comments

Two members of the RSE Young Academy of Scotland were presented with early career prizes last night at a ceremony hosted by the RSE. YAS co-chair Neil McLennan was joined by Gordon Pentland in receiving an early career prize. Neil’s work supporting and challenging improvements in education, particularly as President of the Scottish Association of Teachers of History, has earned him the RSE/Henry Duncan Medal (Early Career Prize) for outstanding contribution to civic society, creativity and social enterprise, education and the social sciences. Gordon Pentland, senior lecturer in History at Edinburgh University, was awarded the RSE/Thomas Reid Medal (Early Career Prize 2013) for his high quality research which contributes significantly to British and Scottish political and cultural history and his longstanding commitment to knowledge exchange.

Neil said, “It is a great honour for Gordon and I to receive these prizes. The real prize though is the work of the RSE and the Young Academy of Scotland to bring together innovative practitioners from all sectors that collectively impact on creating public good.”

The presentation of these prizes was followed by a lecture from senior prize and medal winner Professor David Hewitt. Recipient of the RSE/Sir Walter Scott prize, Professor Hewitt paid homage to Walter Scott on the bicentenary of the publication of the first historical novel, Waverley. The lecture considered the different kinds of past, and the different approaches to finding and reliving the past in Scott and such writers as William Wordsworth, John Ruskin, and Marcel Proust. 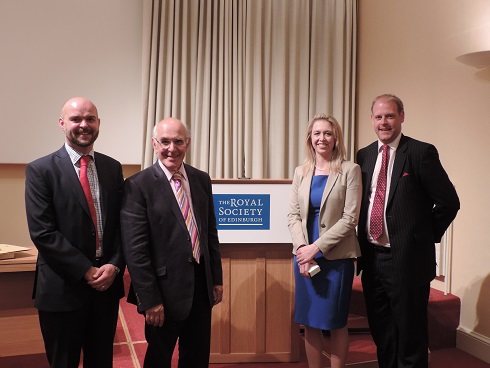