By Sarah Virgo3rd July 2017 No Comments

Siobhán O’Connor, a member of the YAS Health and Wellbeing working group and lecturer at Edinburgh Napier University, was selected to take part in the Edinburgh International Film Festival (EIFF)’s Youth Hub Filmmaking Competition. Along with two other female scientists, she presented her health research to a group of young Scottish filmmakers on Saturday 17th June 2017. Supported by the Wellcome Trust, the project was designed to engage young people in understanding how science and research is represented in film and to inspire them to produce their own short film to educate and inform the public about issues facing contemporary society.

Siobhán presented her research exploring the use of technology to manage infectious diseases in developing countries such as Malawi, while Dr Tara Spires-Jones spoke about neurodegenerative illnesses like dementia and Yana Aleksandrova discussed her work on maternal behaviour in mammals. The six groups of young filmmakers had only one week to write, shoot and edit their short film before it was judged by a panel of film industry experts and the three researchers.

As the quality of the submissions was so high joint first prize was awarded to two short films, “Malaria Hysteria”, which explored how online political propaganda can help spread fake science leading to ill-health, and “Emily”, which delved into the physical and personal effects of Alzheimer’s disease on young women. All six short films were shown on the big screen at Cineworld, Edinburgh on Sunday 2nd July where the winners and runners up were announced and given cash prizes to help them continue their careers. Congratulations to Sean Saez, Maddy Reay and Muireann Nic an Bheatha who produced “Malaria Hysteria” and Abigail Wallace, Emily Wallace, Aisha Jenkins and Freya Papadopoulos who produced “Emily”. 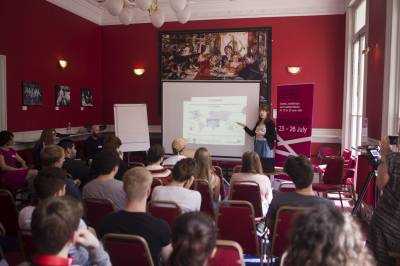 Siobhan presenting her health research at the EIFF Youth Hub