European young academies award prizes for answers to the question: “Who Gets Carried Away by Europe?”

By Marie Montondo17th July 2015 No Comments

A Question for Europe, a joint project between YAS and six other European young academies, has announced the winners of its competition, “Who Gets Carried Away by Europe?”

The competition, which was supported by the Commerzbank Foundation, encouraged participants to answer the question “who gets carried away by Europe?” by submitting any type of creative response; academic, literary, musical, photographic, and audio-visual submissions were accepted.

An international jury of members of young academies of Germany, Scotland, the Netherlands, Sweden, Denmark, Poland and Belgium (Flanders), adjudicated the entries.

First place (£5,000) was awarded to Christine Lehnen from Germany for her short story “Zeus/Europa,” which references ancient mythology in the context of refugees in the Mediterranean. Krzysztof Usakiewicz from Poland won second place (£3,000) for his report “Not Just for Kicks,” which covers the Warsaw football project “Ethnoleague.” Third place (£2,000) was awarded to “The European Dream,”  a photo report by Line Zachariasen and Lisa Staugaard from Denmark.  Their report comprised a series of affecting photos of Sicilian refugee centres. 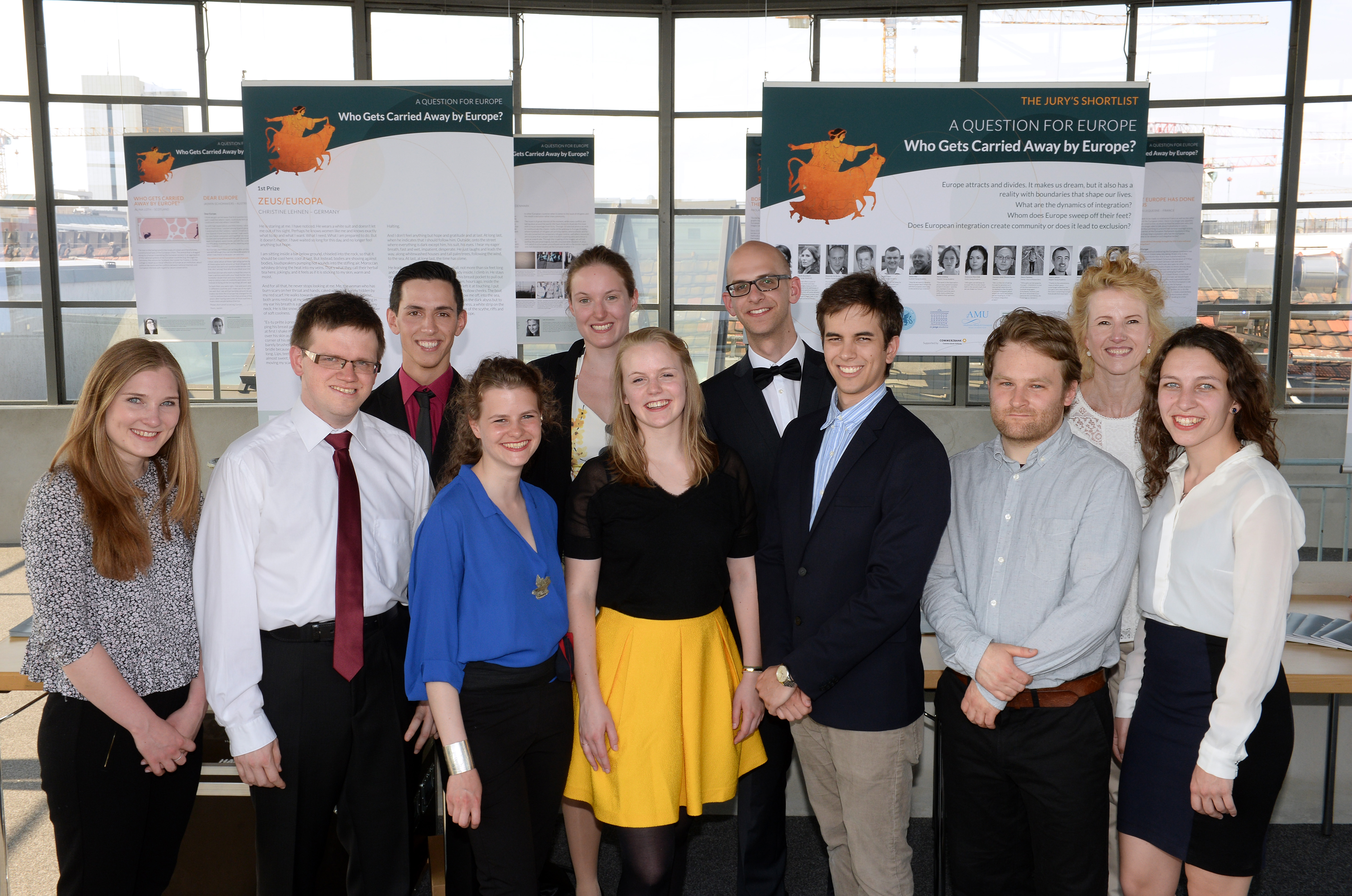 Pictured: Winners of the competition, “Who Gets Carried Away By Europe?”

The jury also awarded two special prizes for notable entries.  “The Advancement Award” was given to Moritz Alexander Klein from Germany for his essay “Preparations for a Journey” (LINK) (translated). “Best Collaborative Project” was awarded to Giacomo Bertazzoli, Pauline Buffin, Gustavo Dantas, Guy Frankel, Chloe Weiss, and Christoph Wiest, a group of ERASMUS (LINK) students for their video entry, “Who gets carried away by Europe?- ERASMUS.”

At a meeting of the Junge Akademie (Germany’s young academy), Professor Jan-Hendrik Olbertz, member of the board of trustees of the Commerzbank Foundation, gave a laudatory speech and presented all five winners with prizes.

Professor Olbertz emphasised the importance of inspiring young people to engage in research and creative projects. “Recognising their achievements in the way the Junge Akademie does by the competition ‘Who Gets Carried Away by Europe’ is part of that inspiration” he said. “In particular, acclaiming and supporting inventive ideas in science and the arts can help young people to cope with today’s and future challenges.”

All winning entries and shortlisted entries can be found at www.aquestionforeurope.eu

competitioncreativeEuropeinternationalprizes
By continuing to browse the site you are agreeing to our use of cookies.