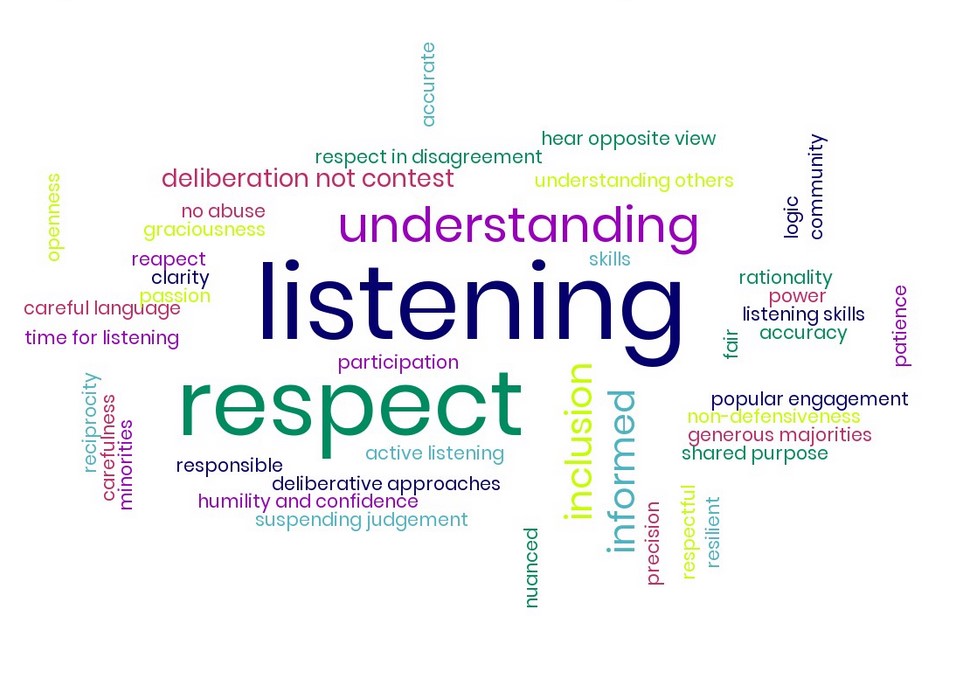 Democratic politics has always been a place of discussion, disagreement and debate. However, recent politics – especially in the age of social media – seems to be increasingly polarised. This raises the question of whether there are better and worse ways to address contentious issues. We need ways of debating controversial topics with each other, while still recognising common ground and striving to achieve common cause. This applies to public settings such as parliaments and media, but also to ordinary discussions amongst family members, in schools, at workplaces, as part of community organisations, and online.

To that end, we are attempting to identify a set of principles grounded in an ideal of public debate as informed, respectful, and inclusive discussion amongst those who may initially disagree but who listen well to each other. Such debate involves rethinking what it means to be ‘right’ or ‘wrong’ opens up more space for concession and collaboration. It aims to build consensus, amongst a wide group of people from diverse backgrounds with different experiences, abilities, and knowledge.

We hope that identifying a set of shared principles for discussing contentious issues will make these discussions more constructive and productive while also strengthening our bonds to one another. To do this, we have organised a number of events:

The charter originated at a one-day event in May 2019 with politicians, media personalities, campaigners, activists and academics to share experience and propose possible principles.

We hosted an RSE Curious event in August 2019 where members of the public were invited to contribute to the ongoing development of our charter for responsible public debate by commenting on the principles proposed at the event in May and proposing their own principles.

We ran an event at the Scottish Parliament’s Festival of Politics in October 2019 to further refine the principles and discuss the process of improving the quality of political debate in Scotland.

The general membership of the Young Academy of Scotland has given us invaluable feedback and assistance, especially at a critical feedback session at the December 2019 Plenary meeting.

We have also led discussions of the project at Millennifest 2019, Wigtown Book Festival, and Learning for Sustainability Scotland; and have several upcoming events scheduled.

1. Aim for accuracy, and base your contributions on evidence and experience.

2. Talk to people with different beliefs, experiences, perspectives and backgrounds.

3. Be honest in how you communicate, and speak with conviction for what you believe.

4. Listen carefully, open-mindedly, and with empathy.

6. Show appreciation for good points made by others, acknowledging when they change your mind.

7. Communicate in ways that unite rather than divide.

8. Try to address imbalances in power, knowledge and accessibility.

Our next step is to continue to hold civic events where members of the public can feed into our attempts to refine and add to the principles emerging from our work so far. If you’d like to get involved or have us come talk to your group, please get in touch. Thank you to everyone who has already contributed.

What do YOU think? Fill in the feedback form below to tell us what Responsible Debate means to you!

about membership
By continuing to browse the site you are agreeing to our use of cookies.