By Marie Montondo18th October 2021 No Comments 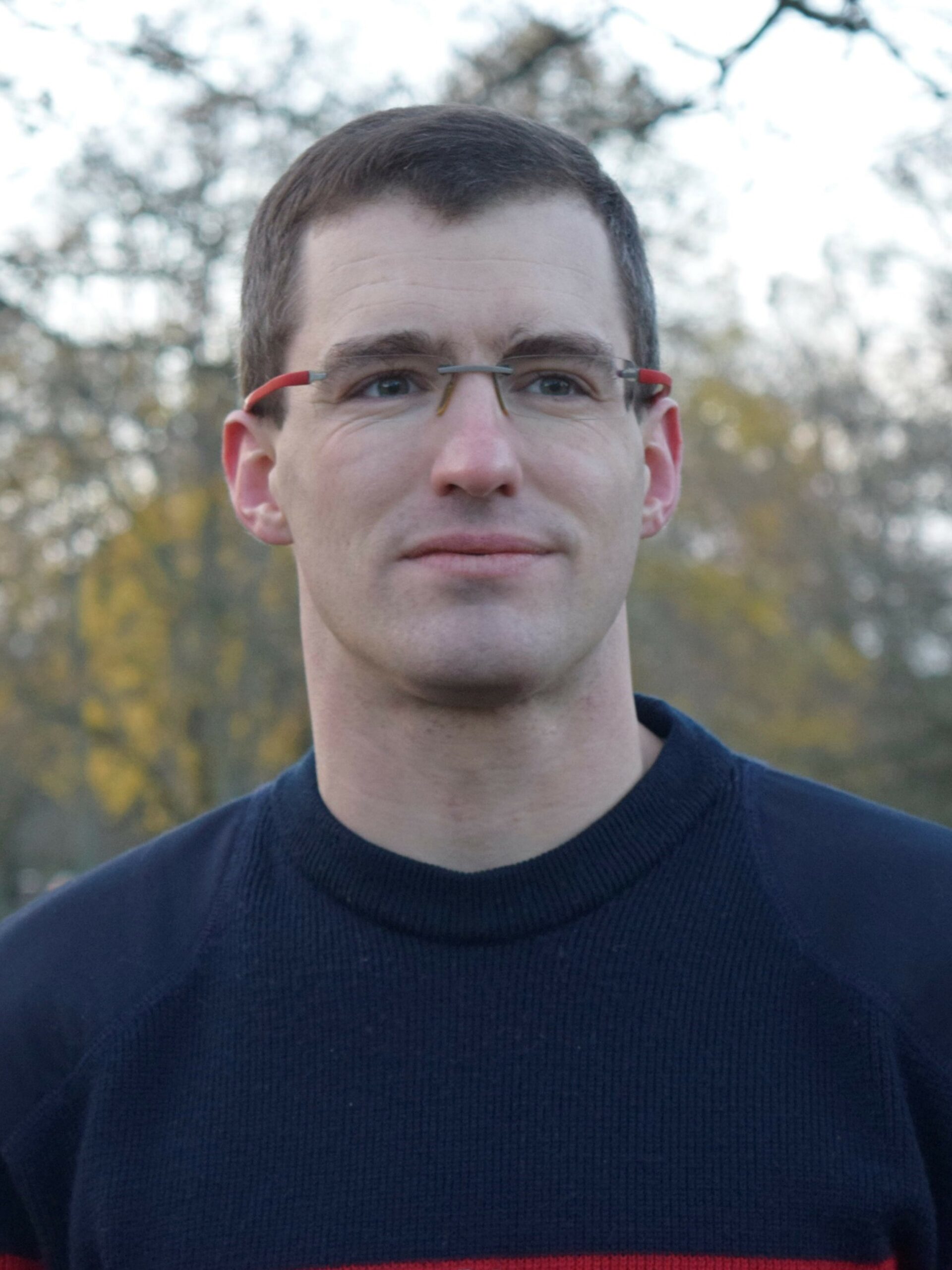 First thing’s first – going to watch the football, in Scotland at least, is probably going to be a very small part of your environmental footprint. Unless you come to games by helicopter or your team goes on a massive run in Europe (which our coefficient suggests is highly unlikely), your engagement with Scottish football isn’t going to make or break your emissions tally. The world’s leaders aren’t going to gather at COP26 and decide that banning Scottish football is the way to curb the world’s emissions.

As a country, we are used to bad weather. I can remember driving from the Black Isle to Kirkcaldy with my dad in the mid-90s for Raith Rovers games, only to find out at Pitlochry that the match was off due to a frozen or waterlogged pitch. But climate change is likely to lead to more severe and frequent extreme events – rainfall, storms, floods, heatwaves. So the kinds of questions we should be asking now are: what time of year should we be playing football in? Can we make better use of data and weather forecasts to make decisions about calling games off further in advance, so that teams and fans can plan ahead? If a game’s called off and a team has come a long way, can we think about re-scheduling it the next day in a way that keeps emissions down but doesn’t impact on gate receipts?

And then there’s the heat. We’ve always been quite flippant about hot weather in Scotland, with our ‘taps aff’ culture as soon as it hits 23 degrees Celsius. But as weather gets hotter, we need to take the health impacts of heat seriously. As we saw with the Olympics in Tokyo this summer, there are potential player welfare issues when it comes to training in heat. If we’re having more flexible seasons or even (whisper it) summer football, might we need water breaks or to start games earlier or later? 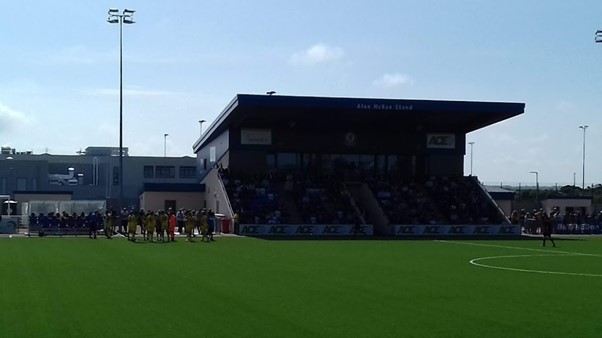 A water break at Cove Rangers vs Raith Rovers in July 2019.

There are also effects on stadiums themselves. There is a multitude of maps and models and simulations out there that give us a sense of how rising seas and rivers affect Scotland. Hopefully we won’t get to a point where Gayfield is washed away into the sea or Forthbank is under water. Having said that, rising sea levels and more extreme events can take their toll. Might we need flood defences around lower-lying grounds? And how do we keep grass pitches healthy when the conditions are changing? While 3G pitches do have their benefits – not least enabling Raith Rovers to play like Brazil ’82 – a recent study from Norway suggests the rubber pellets can get into water courses and end up being a source of pollution. Plastic pitches are also much less effective at mitigating heat island effects – in other words, they get hotter – than their grass counterparts.

Stopping the worst from happening

When a power cut brought the Fife Derby to an abrupt halt several weeks ago, the Rovers gave the whole of Scotland a timely reminder of the fact that a football stadium needs electricity to run. That electricity has to come from somewhere. This is going to be an even more pointed question next year, when the World Cup is held in Qatar with a fleet of brand-new air-conditioned stadiums. Again, that’s going to require a huge amount of power. The more of this electricity we can get from renewable sources like wind and solar, the better. Fortunately, in Scotland, this is something we’re getting better and better art. Wick Academy are even sponsored by the Beatrice Offshore Wind Farm.

As I said at the start, the emissions that are associated with travelling to and from football games in Scotland probably don’t contribute a lot, and a lot of us go to games in buses or on trains anyway – but there’s still room for improvement. When I went to see FC Augsburg in Germany a couple of years ago, I was amazed to see bike racks outside the stadium for those that want to cycle to the football, and free trams to and from the city centre on matchdays. By contrast, we don’t even have trains on a Sunday in Scotland any more. Better coordination and joined-up thinking – like getting the times of trains right and including a train fare in your matchday ticket – could get even more of us onto public transport. 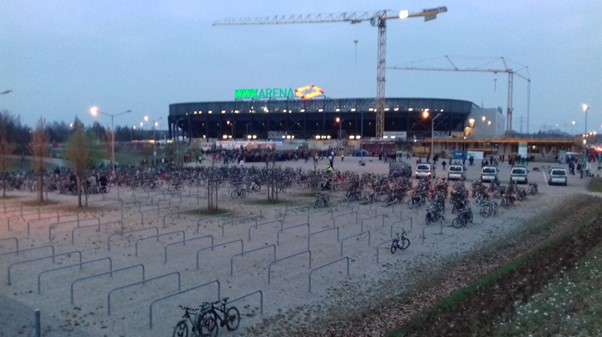 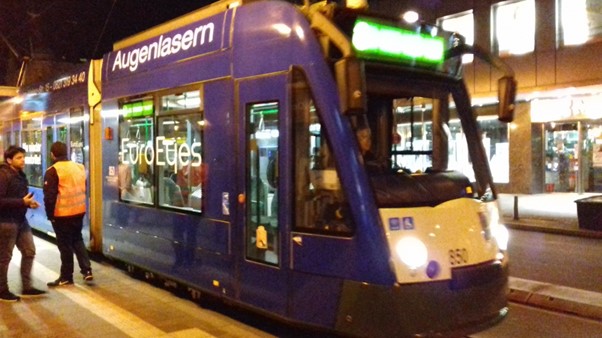 Free trams to and from FC Augsburg’s stadium

Hibernian are striving to be the ‘greenest club in Scotland’ with a campaign focused on energy, food, transport, and education. After the departure of Regan Hendry to Forest Green Rovers in the summer, the sale of Dylan Tait to Hibs pretty much confirms that Raith Rovers only sell talented young midfielders to clubs concerned with environmental issues. Presumably we can now expect Ross Matthews to be snapped up by St. Pauli.

Ayr United ran a really good programme of education in schools on climate change through their academy. Raith Rovers‘ Community Foundation, meanwhile, got a grant from Nature Scot to turn some of the derelict land outside Stark’s Park into healthy and vibrant green space.

As I said at the start, taking climate change seriously doesn’t mean we have to stop going to the football. And I certainly don’t want to preach at folk. Football – and football clubs – are however a great channel for sparking discussion and thinking on how climate change might affect other areas of our lives. I’m going to finish with a final offer. The COP26 negotiations end on November 12th. Raith Rovers are away to Hamilton Accies on November 13th. If any of the world leaders want to extend their stay in Scotland for a day, I’m extending an open invitation to them to join me in the away end at New Douglas Park to share some ideas on how we can make a fair and effective climate change response happen.

climateclimate changeCOP26cultureemissionsfootballleisuresea levelsportsustainabilitywaterweatherweather eventsYASRoad2COP
By continuing to browse the site you are agreeing to our use of cookies.